The Iceberg is a blog that celebrates depth and craft. Its goal is to showcase people who think deeply about things you didn’t know anyone thought deeply about.

Sign up for the newsletter and get weekly updates and B-Sides every Thursday. Look at this. This is just flat out beautiful. Not only that, but it has the very iceberg-y quality of something that someone spent hours and hours toiling over but that will only be seen for a few seconds at a time. As an added bonus (or curse?), you won’t be able to watch a sci-fi movie after this without paying very close attention to all the screens.

Watch the reel at the top of the page, click through the slideshows, and watch the interview with the director (and Gmunk) about their process. You get to see him nerd out over grids, I love it. Highlight: As intricate as the whole thing is, Gmunk still humbly refers to it as “just dots, lines, and circles, really”

This guy is SO excited about paper airplanes. Seriously, I wish I liked anything as much as this guy likes paper airplanes. Fervor aside though, there’s some serious science, engineering, and history knowledge being dropped in this video (it’s all about those dihedral angles). Highlight 1: Those boomerang planes. Highlight 2: how casually he just tosses these things around, although I suppose they are really just sheets of letter sized paper, aren’t they?

Rayman in Super Smash Bros? Nope, it's a hoax, although an extremely elaborate and convincing one

I love this video because even if you know nothing about Super Smash Bros, you can still appreciate the process of replicating something in excruciating detail. This is art forgery, but for an Internet era.

The amount of work that needs to be done to produce a shaky, low res, 20 second video of a single screen of this video game (seen at :26 in the video, or separately here) includes, but is not limited to: Creating not one, but two pieces of original digital artwork imitating the art style of the game; isolating a series of small moving elements of the user interface, pixel by pixel and frame by frame; and recreating a handful of barely noticeable graphical elements that swish onto the screen for a mere second.

Omni knows he has to do all this because he knows that skeptical forum goers will scrutinize endlessly, tearing apart every frame and zooming into every pixel, looking for the tiniest crack in the facade. And after all that, people still thought it was real. Well done, Omni. As the top YouTube comment on the video says: “this was a shit ton of work just to fuck with people”.

Basketball Inaccuracies In A Teen Movie

Quick! How many of the basketball players in High School Musical are using illegal numbers on their jerseys?

If you didn’t get it right, you’re probably like me in that the accuracy of regulation uniforms for high school basketball teams in the state of New Mexico isn’t the thing at the forefront of your mind when you watch High School Musical. Most likely though, neither of us are Derek Rossignol. Aside from uniform legality, Rossignol also touches on such topics as: “Does Coach Bolton actually know what he’s talking about?” and “Could the specific model of scoreboard used malfunction in a specific way it does in order to advance a specific plot point?”

“This is a story of how four incidental ingredients spanning decades...came together to cause the most curious of bugs, and how we fixed it.”

This is the perfect recipe for an iceberg — one person’s story of diving deep, not just into a software codebase but also into history and language. I would say more but it would spoil things. Highlight: Communism playing a major role.

Most video games don't animate dogs correctly. Kevin Cancienne isn't having any of it.

You know how corgis are basically small furry motorcycles? At the very least, according to Kevin Cancienne, they both lean in to counterbalance when they make turns at high speeds. In this talk at the game design conference PRACTICE, Kevin describes the trouble he went through learning every detail about how dogs move so players could accurately feel immersed in his game.

Blink-182 and other pop punk bands pronounce certain words very specifically. Where did that come from?

I used to wonder all the time why people’s singing accents were different from their speaking accents. It turns out that it’s a very complicated mess of tracing histories back through where different genres originated. If you’ve ever thought Blink-182 or any of their contemporaries sounded a bit silly, be prepared for more information than you thought you could take on how exactly that came to be. Highlight: Avril Lavigne, as a Canadian in an American-invented/British-influenced genre, has an accent that is…complicated.

Designing The Sounds Of A Universe

Ben Burtt, sound designer on WALL-E, talks about how he created a universe "from the sound up"

Foley artists are some of the coolest people precisely because not a lot of people know they exist. Originally I had written a bunch about what Foley is and why and how the people that do it are awesome but the first 15 seconds of this video explain it better than I ever could, so just watch it. Highlight: Burtt uses a slinky to create a laser gun noise. 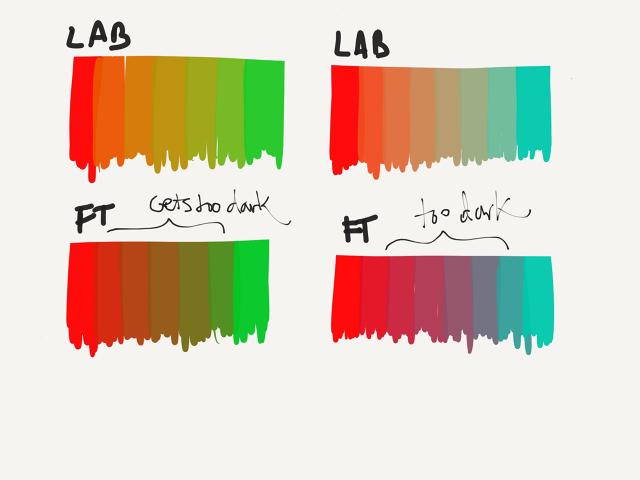 What color is halfway between yellow and blue? If you answered green, you’d be wrong: well, you’d be right in one way, if we’re talking about paint, but you’d be wrong in many other ways, including the way many computers interpret colors. If that sounds complicated, it’s nothing compared to what the team at FiftyThree had to go through to build the color mixer for their iPad app, Paper. Turns out there are many many different ways to interpolate colors, and none of them are quite how we experience reality. Highlight: The team actually found a method that reflected real life too closely, and had to take a different approach from there.

The NYC subway system is a hundred years old and has millions of daily riders. So getting work done can be a bit of a mess

“I honestly just wanted to know why the F train didn’t have clocks. I never expected it to be so complicated.”

I think if you live in New York you are at some level aware that the hate leveled daily at the MTA is at least a little bit unwarranted. As unreliable as it can be sometimes, its operations can be very impressive when you consider its unrivaled daily ridership combined with the age of most of its infrastructure — much of it still analog (!).

But one thing many commuters aren’t usually conscious of on a daily basis is the incredible amount of bureaucracy it takes to get anything done. Even small changes can take millions of dollars and years to complete. The amazing thing about this article is how perfectly it captures in detail the underlying conflicts and challenges that obstruct progress. If you ever thought you had an idea of what the MTA should be spending money on, prepare to be proven wrong.